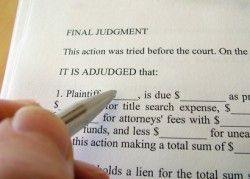 Default judgments based on defective pleadings are voidable not void, and not subject to collateral attack under 1.540(b) at any time.

Second, failure to state a cause of action is a specific defense recognized by Florida

(1) A party waives all defenses and objections that the party does not present either by motion under subdivisions (b), (e), or (f) of this rule or, if the party has made no motion, in a responsive pleading except as provided in subdivision (h)(2).

(2) The defenses of failure to state a cause of action … may be raised … at the trial on the merits in addition to being raised either in a motion under subdivision (b) or in the answer or reply.

Fla. R. Civ. P. 1.140(h). If a party is properly notified of pending proceedings, that party has the opportunity to raise a defense, such as failure to state a cause of action, in an answer, at trial, or at any time prior to final judgment. Otherwise, that defense is deemed waived. Fla. R. Civ. P. 1.140(h)(1).

In Southeast Land Developers and Moynet, the subject complaints failed to state a cause of action. Se.

The Fourth District correctly noted that Becerra never explicitly states that a default judgment based on a complaint that fails to state a cause of action is void, La Mer Estates, 137 So.3d at 399, even though Southeast Land Developers and Moynet cited to Becerra for that precise principle. In addition, Southeast Land Developers and Moynet failed to demonstrate how rule 1.540(b) replaces this Court’s precedent that defines a judgment as void.

In the present case, BNY Mellon was properly notified of the proceedings, the hearing on final judgment, and the entry of the final judgment. Id. at 400. Indeed, BNY Mellon was twice notified of the default judgment and failed to respond or appear at any hearings. As such, the bank had ample opportunity to raise the failure to state a cause of action either in an answer or at any time prior to final judgment pursuant to the Florida Rules of Civil Procedure and did not do so. Thereafter, the bank “could have raised the issue on direct appeal,” but similarly elected not to do so. Id. at 401.

Thus, the Fourth District properly reversed the trial court’s order that rendered the default judgment in the present case void. Because we agree that the default judgment was voidable, Florida Rule of Civil Procedure 1.540(b) was not applicable, and therefore the default judgment could not be collaterally attacked one and one-half years later when BNY Mellon finally decided to respond. See Coleman, 3 So.2d at 152–53 (“We do not think the judgment in this case was void. The declaration had been upheld by the trial court and final judgment was entered on the verdict of the jury after due notice and every opportunity the law affords was given the defendants to amend, plead, or offer their defense. They did not appear and let the time pass in which writ of error is available to them.”).

Accordingly, we approve the Fourth District’s decision in La Mer Estates and disapprove Southeast Land Developers and Moynet to the extent that these cases are inconsistent with this decision.